IF ANYBODY SHOULD BE...ALICE NEEDS TO BE.

Go here and sign this petition. It's a no-brainer.

I met Alice Cooper once. My wife and I were trying to find an art gallery in the bowels of downtown, and when we saw a four well-dressed people rounding the corner near Alice's restaurant, Cooper'stown, we thought they might be people looking for same art gallery. As we approached I realized one of the guys was Alice, and he literally asked EVERY EMPLOYEE of his restaurant if they knew where the gallery was that we were looking for. What a guy.

Naturaly, we went back and ate there later. It was least we could do!

If you're ever at Cooper'stown, try the coconut shrimp. 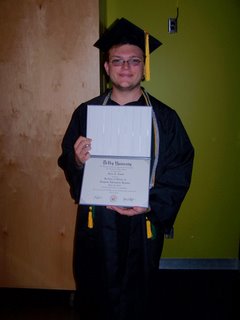 And Brendan is doing quite well in high school, thank you.

My gig at Coffee Crickett (their spelling) went pretty well, considering a dust storm blew through and I honestly didn't know if anybody would show up. But quite a few people did, including a friend of ours who we hadn't seen in a while, and she just happened to be walking by! Small world syndrome and all that.

I even sold two CDs!

Fellow folkie Chuck Cheesman saw my rant about how stupid Myspace is and informed me that what I have to do is re-register as a musician. (Thanks Chuck!) I don't see anything on the main myspace registration page that says "Register as a musician" so I'll have to pursue this further. But it's a start.

This coming weekend, we're off to WesterCon in San Diego. I will be playing a concert on Saturday at 2 p.m. Hopefully there will be a few filk (sci-fi-folk) dealers there who haven't bought any copies of my CD yet, and I can unload some more!

Against somebody's better judgement, I'm sure, my first album, "Something to Sell at My Gigs," can be downloaded, in whole or in part, at iTunes. In other words, I can be ON YOUR POD!

I have no idea how much of a pittance I'll receive per download, 'cause iTunes gets a piece and CDBaby (who set it up) gets a piece. Anyway, should anybody actually download a song I'll let you know what kind of dough I'm rolling in. Or WHATEVER that is I'm rolling in.

MY SPACE.COM IS REALLY PISSING ME OFF

Does anybody who reads this blog know how to put one of those stupid Standalone players with samples of your CD on to your Myspace.com page?

I have written these people easily ten times and nobody answers my note. I have found the page that purportedly tells you how to put up a player and I SWEAR TO GOD, THIS IS WHAT IT SAYS:

"Get somebody who knows how to do it to put one there for you."

Thanks a lot, assholes.

My kids got me "HTML for Dummies" for Father's Day 'cause they're tired of hearing me bitch and moan about how even 19 year old college dropouts who anally rape themselves with brooms online (GOD I hope I'm making that up) somehow know how to design, post and CHANGE their own websites, whereas I have to keep bothering a wonderful person in Virginia, who I love dearly, to do stupid things like change my gig list every week.

Why can't you just mail new info to, like, Webgod and say, here. Drop this in. You know where. Thanks! And boom! It'd be done. Or even better, why can't my computer know it's me, and just let me change everything on screen like a Word document? Cut and paste?

This learning HTML stuff is going to require my actually having to read, which I hate doing because I'm a man.
Besides, my friend Nancy already showed me all the HTML I thought I was ever going to have to learn, namely, how to make Bold type on Blogger.com.

Oh, and italicize it, too.

Anyway, if any of you have a myspace.com page with an audio player on it, PLEASE tell me how to put one there without having to do anything but fill out a form or something. (I realize that the next pain in the ass is going to be trying to figure out how to put my SONGS online but hey, one thing at a time...)

My first album, "Something to Sell at My Gigs," is downloadable now at www.emusic.com! And I didn't have to do shit!

I will be playing at the Coffee Crickett (their spelling, not mine) in Mesa, this Saturday from 8-9. NE corner of Brown and Recker. I've never heard of those streets, either. Let me know if you want directions.

My first CD, "Something To Sell At My Gigs," is now available for download online, thanks to the combined efforts of CDBaby and www.emusic.com ! So go to Emusic.com, type "Tuerff" in the search window, and download away! You do have to join emusic.com, but you get something like 40 free downloads for doing so!

(My new CD will eventually be up, too, but these things take time.)

I played the Flagstaff Folk Festival last weekend, and I don't wanna kvetch, but...

These people need to do some better planning and scheduling. They have four stages set up (good).
Two of those stages are amplified (bad), and both of those are too close to either of the stages that aren't amplified (really bad).

One of the stages, the "Art Gallery Stage," is virtually invisible and you have to WANT to find it. They need to put up some signs. I ended up playing second to last on this stage to about 13 people. Three of them were my family. I did sell a CD, which is good, but something's gotta be done.

Which brings me to the scheduling problems:

1. They say on the website that people MUST let them know if they want to play by May 1. However, they continue to take in acts right up to the week of the show.

2. This, in turn, makes it impossible to make out a schedule until literally the week of the show. I had no idea when or where I was playing until last Monday.

3. I also suspect some laziness in the scheduling. Case in point: Last year, Gavan Weiser opened the day in the "Art Barn" area, and I was the second act in that room on that day. This year, I was the second-to-last act on the Gallery Stage, and Gavan closed the day on that stage. Which makes me wonder if they didn't just flip the schedule upside down and change out the locations for those artists who were here both last year and this year. Whatever.

HAPPY 25th ANNIVERSARY TO US!

Yes, even though we had the party on Saturday, Jan and I were married 25 years ago today. Like today, it was unseasonably, unreasonably hot. The A/C was busted in the temple, but oddly, NOT in the reception area in the back thank God.

The best gift I could ever hope for: the coolest wife in the world.

Neither of the boy's two left arms was fully functional, but surgeons decided to remove the one growing closer to his chest after tests showed it was less developed.

"We found the nerves and blood vessels for the arm were formed just as they would be for a normal arm," Chen told reporters.

Chen said the baby will require long-term physical therapy to gain function in his remaining hand, which has no palm and flexes in either direction.

I COULD THINK OF WORSE WAYS TO SPEND THIS SATURDAY. DON'T MAKE ME.

Come see me play at the Flagstaff Folk Festival this weekend at the Cononino Center for the Arts, 2300 N. Fort Valley Road!
I'll be on the Art Gallery stage near the end of the day, from 4:50 to 5:20. Then stick around for fellow wierdo Gavan Weiser right after me!

How to get there: Drive to Flagstaff. Head for the Grand Canyon. Shortly after you make the left turn toward the Snow Bowl, you'll start to see signs pointing the way in.

Well, this evening Dr. Demento played my song "Catch Phrases" from my new CD and I even got to hear it using an audio feed! Woo Hoo!

He mentioned that I had been a popular choice with his listeners five years ago and that I had a new album and that my name was spelled T-U-E-R-F-F. I guess he likes me!

Jan and I held our 25th Anniversary party last night. 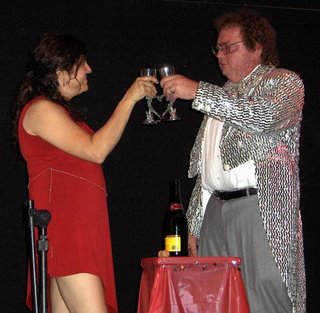 We toasted our success...nice dress on Jan, doncha think? 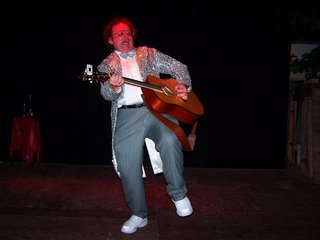 Then I played a little...nice, subtle jacket, doncha think?

And a good time was had by all who braved the heat and showed up. Best part was that the best man at my wedding, Matt Turney, surprised me by bringing with him a mutual friend, Kendall Marshall, whom I had not seen in a few years, by surprise!

Thanks to everybody who came!