I was having a lot of fun looking at Wikitravel the other day. It's an offshoot of wikipedia and it provided handy traveling tips for pretty much anywhere.

Some of them are just unintentionally funny.

Take Namibia. After an unbelievably glowing review of the country -- relatively safe, good exhange rate, interesting people, you see this:

"Namibia has a serious problem with driving under the influence of alcohol. The problem is aggravated because most people don't consider it a problem."

Somebody recently brought up Casey Stengel in a conversation. Next to Yogi Berra, Casey probably has more wonderful comments attributed to him than anyone else.


1. The Mets have shown me more ways to lose than I ever knew existed.
2. Mister, that boy couldn’t hit the ground if he fell out of a plane.
3. You have to go broke three times to learn how to make a living.
4. Now there are three things you can do in a baseball game. You can win or lose or it can rain.
5. Can’t anybody here play this game? (observing the hapless Mets that he managed)
6. Never make predictions, especially about the future.
7. Don’t drink in the hotel bar; that’s where I do my drinking.
8. All right everyone, line up alphabetically according to your height.
9. I was not successful as a ballplayer, as it was a game of skill.
10. We are in such a slump that even the one’s that aren’t drinking aren’t hittin’.
11. A shave please, but don’t cut my throat. I may want to do it later myself.
12. The way our luck has been lately, our fellas have been getting hurt on their days off.
13. Bobby Brown reminds me of a fellow who’s been hitting for 12 years and fielding one.
14. If we’re going to win the pennant, we’ve got to start thinking we’re not as good as we think we are.
15. Oldtimers weekends and airplane landings are alike. If you can walk away from them, they’re successful.
16. Look at him. He doesn’t drink, he doesn’t smoke, he doesn’t chew and he doesn’t stay out late – and he still can’t hit.
17. The trouble is not that players have sex the night before a game. It’s that they stay out all night looking for it.
18. See that fella over there? He’s 20 years old. In 20 years, he’s got a chance to be a star. Now that fella over there, he’s 20 years old, too. In 10 years he’s got a chance to be 30.

Among the many great Stengel stories: While managing the Yankees he called outfielder Bob Cerv aside and said:
"Nobody knows this [yet], but one of us has just been traded to Kansas City."

Once while managing the Mets in the early days of the team, he got so fed up with their losing ways that after a typically lopsided loss, he walked into the locker room, held up a baseball and said: "Gentlemen, this is a baseball." Before he could say anything else, one of the Mets players said: "Slow down, coach, you're going too fast."

Have a nice weekend!


I found this wonderful performance on YouTube. It's from the Rolling Stones video "Rock and Roll Circus," which for some stupid reason I've never purchased on DVD (although I have it on VHS and CD).


In case you don't recognize everybody, John Lennon is getting down with Mr. Eric Clapton on the guitar, Keith Richards on bass (yes, BASS -- not a bad bass player, either) and Mitch Mitchell from the Jimi Hendrix Experience on drums.

You should find/rent/buy this little musical oddity because the whole thing is REALLY GOOD. Even the part with Yoko and a fiddle player.

Over at Archive.org you can download the original 1912 version of "I'm Henery the 8th, I Am," by an English music hall singer named Harry Champion. It's neat, and as you'll find out, the second verse is NOT the same as the first...or the third...

I've always found it interesting how songs that last are frequently only remembered for part of the song -- usually the chorus.
Think about it: Take Me Out To The Ball Game, "I'm Henery...." Wait Till the Sun Shines, Nellie, etc. etc. I think part of that might be attributable to the use of partial songs in Warner Brothers cartoons, as that's all we boomers know because that's how we found out about a lot of them in the first place.

I wonder what songs of today are most likely to get the "shortened" treatment?

"Alice's Restaurant," for sure.

"Yesterday." Most people only know the first verse of this song already.

My friends Keith and Carrie O'Brien are in the process of moving to Maine. We will miss them, but yesterday Keith sent me this picture of the house they're renting and I'm already jealous of the new locale, as we swelter in 100-plus heat... 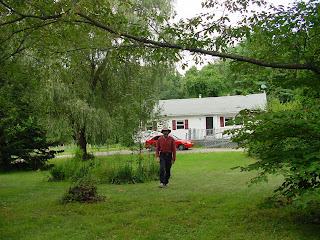 First Bernie Mac, then Isaac Hayes. I see where they were both working on a movie with Samuel L. Jackson. Think HE went to the doctor today?

That Olympic men's swimming relay race last night was one of the best TV moments I've ever seen.

COOLEST, MOST BIZARRE STORE IN PHOENIX:

GOOD CHEAP GREEK EATS: Crave Cafe and Lounge, between the Valley Art Theatre and the underground piano bar on Mill Avenue in Tempe. Incredible food and you can fill up for damn near nuthin.' The hummus was a surprise (deep fried pita triangles!), and the souvlaki sauce may have something in it other than garlic, but I don't think so. Yummmmmm......

I'm playing at the Grand Avenue Tavern this evening at 8 p.m., once again opening for the Comedy Contest. I get 30-40 minutes, the contestants get five. I win!