Yep. This is pretty much my job. I have seen/experienced/caused/said pretty much everything depicted here at some point in the last 26 years. Can't wait to see the LONG version...

THAT'S NOT WHAT WE MEAN! NOW DIE, INFIDEL!

Is the irony of Muslim reaction to the Pope's little faux papa lost on everybody but me?

He quotes the 14th century Byzantine Christian Emperor Manuel Paleologos II, who said "Show me just what Muhammad brought that was new, and there you will find things only evil and inhuman, such as his command to spread by the sword the faith he preached."

Muslims, rightfully so, spoke out in protest, saying that's nonsense. There is much more to the religion than that. And there is.

So how do most Muslims react to this comment? Do they invite the pope to sit down and learn about the religion with a couple of leaders?

No. They threaten to kill the pope and destroy him by the sword.

That's like showing up at an anti-hydrocarbon rally in a Hummer.

Or bringing beef sandwiches to a PETA rally.

When I'm king, all religion will be prohibited until people learn to use it correctly.

Meanwhile, the Cardinals offensive line has to learn how to block. Consistently.

My CDs are now available at all Zia Records locations, including Tucson and Las Vegas. I would imagine they can be found in the "Local" music section much like they are here in Phoenix. Tell your friends to go to Zia and start a run on my stuff.

Next week I'm flying to Milwaukee to attend a reunion on September 30 of people I WOULD have graduated with if I hadn't moved here first. I grew up with a lot of these people so I hope some of them show up. Even if they don't, I'm planning to have dinner with an old pal of mine who now lives in Janesville on Friday the 29th. (I'm insisting on German food.) Then during the day of the 30th another fellow I've become reacquainted with thanks to the internet has offered to give me a Milwaukee tour. Definitely looking forward to that. I also want to drive by my old house and get a picture of it.

The last time I was in Milwaukee was 1990 for a business trip that pretty much garnered absolutely nothing. But the company we were pitching paid for it so we had a good time.

All of my luggage is being checked. I want to get through as fast as I can.

One of the nice things about opening for a 60s cover band -- specifically the Violet Wing, who are wonderful and you should book them-- is that after my set (which unfortunately nobody got pics of), they called me out in their first set to sing "Louie Louie." As you can see, I really get into it. 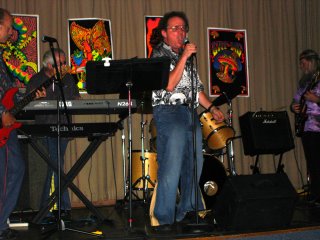 Someone I know who should know me better actually had the gall to leave a message on my phone at work the other day that ended with something to the effect of, "I may not be able to answer my phone so text me."

I wouldn't know how to text somebody if a billion dollars was on the line. For the life of me I can't imagine why anybody wants to do that. I costs a thousand dollars a message, it takes forever, and YOU HAVE A PHONE, FER CHRISSAKES! USE IT FOR WHAT IT'S FOR! CALL AND LEAVE A FREAKIN' MESSAGE!

Jeezus, I hate technology for the sake of stapling two things together...

OUT OF THIS WORLD FILKING

The good music gods must be out and dancing around this time of year. Last Thursday was a better-than-better-than-average night at the Open Stage I run at Fiddler's Dream. Then, this past weekend I was at CopperCon, the local sci-fi convention, and I spent more than the typical amount of time in the filk (that's science fiction folk music for you non-skiffies) room.

The musician guest of honor this year was one Seanan McGuire. She is loud, she is unashamedly, unapologetically and entertainingly brash, she is talented, she is funny as hell, and she can sing like nobody's business.

Did I mention she's funny as hell?

Filk is kind of a weird genre. You can alienate a lot of people with it especially if you write songs about things that much of your audience neither knows or cares about. There are three basic ways to approach writing filk music: A) ignore the fact that most of the world (even 95% of the people at science fiction conventions) is avoiding you like the plague and write about what you want anyway (i.e.: Star Trek, Star Wars, Buffy the Vampire Slayer, individual scenes from obscure Robert Heinlein novels that only you and Bob himself read), or b) Keep the subject matter SO general (i.e. Big Subjects: Vampires. Space Travel. Cats. Baseball. Pie.) that everybody can identify with it, or c) Master the art of writing about specific subjects in a way that the non-informed listener can come away with a meaning from the song and be entertained by it, even if they don't get the media reference. Ms McGuire is one of the people who's successfully mastered version C. She entertains the broadest group of listeners possible most of the time. In other words, when you hear Seanan's tunes you might not even realize you're listening to "filk" music, per se. She pulls you in and makes you listen.

The fact that she actually "entertains" when she performs (to the point of Striptease, at one point) is just icing on the cake. She must be a helluva lot of fun at parties.
Check this lady out if you have any kind of interest in sci-fi folk music.

Which is not to say that Ms. McGuire was the be-all and end-all of the amassed talent that showed up at CopperCon. My good pal and "filk wife" (as one friend has taken to calling her) Nancy Freeman played a nice show on Saturday night during halftime at the con masquerade contest. Not the easiest audience but Nancy did a nice job keeping them in their seats.

Chris Dickenson, the aforementioned coiner of the "filk wife" phrase, sang some very nice duets with a woman whose name I didn't get, pretty much off-the-cuff. And everybody else in the room, on both nights, was just ON.

Sunday night, the filk circle included one of the grande dames of filk music, the literally legendary Leslie Fish. The author of literally thousands of songs, she proved once again that you can ask her to play pretty much ANYTHING she's ever done, no matter how old, no matter how obscure, and she'll play it like she just played it yesterday. Leslie owns one of the most mellow-sounding twelve-string guitars I have ever heard. It's like BUTTAH.

Personally, I hardly write anything of a science-fiction vein, but my songs seem to fit into this whole melange pretty well.
------

This weekend I will be playing at the Mesa Women's Center, once again opening for farts even older than me: the incredible Violet Wing! Put on your 60s duds and dance the frug this Saturday at the Mesa Women's Center, 200 N. MacDonald. Doors open at 7, I open at 8, dressed like a f&%^in' hippie. There will be go-go girls, an oil/water light show, everything but the dope! $10 admission and worth every penny -- you'll see!

The preliminary schedule for the Prescott Folk Festival has me busy this year. On Saturday, October 7 I will be performing from 11:20 - 11:40 in a mini-concert and from 2-3:40 as part of a songwriters' circle. Both events will take place in the Sharlott Hall building. This turn of events will piss off my family to no end, since, while they like to go to Prescott for the weather, they can't STAND the Prescott Folk Festival and they pretty much exhaust walking around downtown Prescott in about an hour. But that's their burden to bear. I LIKE the PFF. A lot. And so will you. More info as it approaches.