Check this out. But before you do, answer me this: Am I crazy, or is "Jesus" wearing a Polo Shirt, like he just got back from 18 holes and a foursome with Peter, Paul and Judas? Hey, it IS Orlando...

I wonder if there are rides.

That would be cool. There would be signs in front of each ride, like this:

THE TEN COMMANDMENTS OF THIS ROLLER COASTER:
1. Thou shalt not stand in the car when the coaster is in motion.
2. Thou shalt be at least four feet tall to ride.

Think of the biblical possibilities for rides:

The Shadrach, Meschach and Abednego Ride (You ride around in the middle of summer in a non air-conditioned bus with the windows up)

They need to hire me for good ideas, I tell you...

THE FUN THAT IS PRESCOTT...

This year, I went up to Prescott alone for the Prescott Folk Festival and I was able to stay all day!

Last year, my WIFE even said that.

Hell, last year, my DOG even said that.

I, as always had a good time regardless. But I didn't feel hurried.

Talked with Joe Bethancourt (who didn't play till Sunday, darn him), saw John Lambert and Renee Rivers play (my GOD her girls are getting big) and participated in a fantastic songwriters circle.

I also suffered from Dumbshit Syndrome when, during my own set, I started singing my song "Baby Boomer," fully aware that Nancy Freeman, who sings with me on the CD, was sitting RIGHT IN FRONT OF ME, and it didn't occur to me to ask her to sing the song with me. I apologized later and told her I owed her a Ragged Queen. Much as I wish that was a stiff drink in a bar, it's actually the song I sing with her from her upcoming CD "Stardust County." Sho' nuff, at her set later, she called me on it and we did the song together. We sounded good.

The rest of her set was fantastic, too.

Rick Sonder paid me a nice compliment and said my CD is great music for listening to while you're driving across California to get to Arizona. Ever the smartass, I immediately asked him, "So how far did you get before you tossed it out the window?"

He snapped right back: "Quartzite."

More on my trip to Wisconsin:

-- Went to Miller Park to see what it looked like. It's weirder looking than Chase Field but the new Cardinals Stadium has 'em both wooped.

-- How's this for a sobering reminder that you're getting older? The bar that the reunion was held at was situated next to a CEMETARY.

-- The German Food Place I ate at had a great name: Weissgerber's Gasthaus.

-- I even had a couple of wursts for lunch at a restaurant in the Milwaukee airport and they were good, too. Certainly not the worst wurst I've ever had.

-- I spent Sunday morning in a field near a little town called Pewaukee attempting to shoot pictures of a flock of Canada geese. They got wise to me though, and kept moving away. So I shot some "just-turning-color" trees. I was told that I missed "great color" season by about two weeks.

-- Also picked up a great new prop for my act! But you'll have to come see me to see what it is.

GUESS WHERE I WAS LAST WEEKEND? 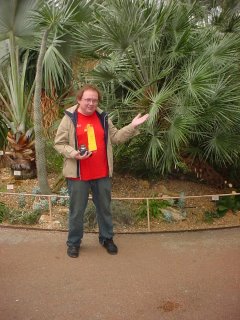 The Desert Botanical Garden? No.

Why, MILWAUKEE, of course!


I bet you didn't know they HAD cactus in Milwaukee.

They don't. You're right. But they do here. I'm standing in the "Arid" dome, one of the three Mitchell Park domes in Milwaukee, Wisconsin. I went back for the 30th reunion of the high school I WOULD have graduated from and I had a ball.

During the day, fellow classmate Chris Tenaglia was nice enough to cart my ass around Milwaukee. We saw many neat things.
Some defy description. Some were wearing lederhosen. (It was Oktoberfest weekend in Milwaukee. You can only imagine.) 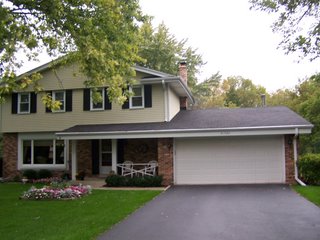 And THIS is where I used to live. They don't make 'em like that in Phoenix.

Milwaukee homes? You can get great deals buying
FSBO by cutting out the
middle man. In a time when
real estate
is tough every little bit helps.)