NOTE TO CONSPIRACY THEORISTS WHO SAY WE NEVER WALKED ON THE MOON: 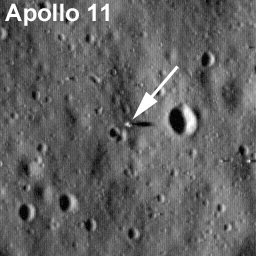 Get over it, assholes.

Need more? GO to the NASA site. My favorite is Apollo 14. You can see all kinds of stuff.

40 years ago, I was 10. Tomorrow, the 20th, was a Sunday and I, like billions of other people around the world, stopped whatever I was doing and watched the moon landing. More important, I watched the reaction of the faces of my parents, who were suddenly watching the science fiction of their youths coming true. I remember my mom saying, "This is really happening!" in a wonderful tone of believing disbelief.

I watched the men walk on the moon, and then I went out and rode my bike, taking more than a couple of stops to look up at the moon and realize, shit, there's two guys up there!

Never mind that all we really got out of the Apollo project was the definite determination that the moon is a giant rock. We should go back. Just because we can.

And before Richard Branson gets there first.

We are in the middle of summer, for sure; a time when you can water the garden every day and the plants still shrivel up and die. But I persevere.

We recently made the switch from Mac to PC. I went kicking and screaming and I feel like I've lost a testicle but at least the thing works, which my Mac wasn't.

------
I am almost totally devoid of gigs at the moment. And I haven't played an open mic in almost a month. I really need to get out more.

Gordon Waller died yesterday. So in his honor, let's all sing!

I really like Facebook. I've found so many people from my past and it's fun to catch up. You all have really interesting jobs...

ARE THEY HANDING OUT APPLICATIONS FOR THE DARWIN AWARDS NOW, OR WHAT?

Three in one day!

Read 'em now 'cause they tend to disappear after a couple days...

My kids' band, Thunderstump, kicked butt at the Firehouse on Friday night. They were stoked. People want their CD. But they don't have one.

I need to find me some gigs. I'm all dried up until Romantasy next month.

Look I'm not gonna say that we're much better than everybody else, but when presented with foreign-sounding names, our media people at least TRY to pronounce the names of foreign dignitaries correctly.

Not so the British.

I am always AMAZED at the ways British reporters mangle the pronunciation of names for people who aren't Brits. I'm told many of them do this on purpose, a kind of nose-thumbing at societies they still feel superior over even though they haven't been much of a power for about 150 years.

Case in point: I was listening to BBC News Service on NPR last night and heard a report about our president's trip to Russia. Did you know our president is named "Berrick Obammer?"

While he was there he met with former president (now Russian PM) VladEEmeer Pyootn.

Oh, and God help you if you're French. Right, Jack Chuh-rack?

Played a great show at Westercon last weekend. Nobody took any pictures though, so here's a shot of me playing in a bar: 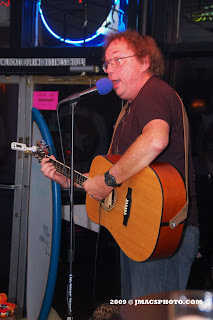 Some wires burned out in a phone box down the street from our house a few days ago. It basically screwed up our phone for a while so if you couldn't get through, it's fixed now.

The only thing that could have made that funereal fiasco for Michael Jackson yesterday even worse would have been if they'd sold advertising. Don't think they didn't consider it.

This Friday, 10 p.m. at the Firehouse on First St. N. of Roosevelt: THUNDERSTUMP! My kids' band! They're funny! They rock! It's FREE! Show up!