I got a press release the other day...

"THE 1ST ANNUAL
SYNCHRONIZED GLOBAL ORGASM FOR PEACE
Please send this out to your entire mailing list!

WHO? All Men and Women, you and everyone you know.

WHERE? Everywhere in the world, but especially in countries with weapons of mass
destruction.

WHY? To effect positive change in the energy field of the Earth through input of
the largest possible surge of human energy. There are two more US fleets heading
for the Persian Gulf with anti-submarine equipment that can only be for use against
Iran, so the time to change Earth’s energy is NOW!

Our minds influence Matter and Energy fields, so by concentrating any thoughts
during and after The Big O on peace and partnership, the combination of high
orgasmic energy combined with mindful intention will reduce global levels of
violence, hatred and fear.

This is something just about everyone can do and enjoy. And you can do it by
yourself or with someone else. You don't even have to tell anyone you're going to
do it!

THE SCIENCE
The Global Consciousness Project (http://noosphere.princeton.edu), Princeton
University, runs a network of Random Event Generators around the world, which
record changes in randomness during global events. The results show that human
consciousness can be measured to have a global effect on matter and energy during
widely-watched events such as 9/11 and the Indian Ocean tsunami. There have also
been measurable results during mass meditations and prayers.
It's free! It's private! It’s easy! It's fun! It just might be the most important thing you
could do for yourself, your family, the planet and our species.
http://www.GlobalOrgasm.org

..... and to think I have to belong to a non-profit group that promotes acoustic music, when all this time I coulda been supporting jerking off? GOD am I stupid.

I guess you'd need live entertainment. Or perhaps just being in a room with a bunch of other people watching them getting down to business would probably work.

Unless you just happen to be friends with a couple of lesbians and Alan Rickman. It could happen.

But hey, if you're planning a dainty soiree on 12/22 with tea, Christmas Cookies, watercress sandwiches and culminating in a massive jack-and-jill-off, count me in. I have the day off. And it's sort of what I do at work anyway.

This month was an eventful one for me, that's for sure. I celebrated birthday number 49 on the 2nd, and yesterday my friend Shirley handed me a very neat belated birthday present: A book called the "Bob Dylan Encyclopedia!" Amazingly detailed and all written by one (very opinionated) guy. That's okay though; I like being able to learn something while at the same time saying to myself, "whaddya MEAN the tracks Dylan re-recorded for Blood on the Tracks were inferior to the originals? Asshole!"

Then, I spent three days in the gulf of Mexico supervising a video for one of our clients. I spent two of those three days on an oil reclamation responder boat that looked like this: 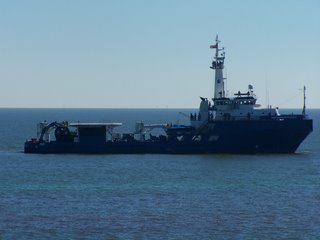 I'd never been to the Gulf before. Rather un-scenic for a piece of ocean, which it basically is. Lots of pelicans and dolphins, though. None of which would pose for my camera.

This was immediately followed by my weekend at TusCon which I previously mentioned.

Eventually, Thanksgiving showed up; good thing we went to my mom's, as this year Turkey Day fell on what would have been my dad's 80th birthday. Mom got a bit emotional at times, so it was good to be there.

Then, yesterday I did something I haven't done in ages: I volunteered at Fiddler's Dream on a day other than THURSDAY. Can you believe it? Do you care? I thought not.

If you're looking for a cheap but entertianing gift for people, give them my CDs! Go to www.cdbaby.com and order, order order! Or just come by the house. Or my gigs on Dec. 6 at Encanto Park and Dec. 9 at the Music Corner, 1500 W. Maryland.

TO TUCSON AND BACK IN 36 HOURS

Went to TusCon last weekend. I was a panelist on three different discussion groups, all dealing with space travel in one way or another. I found myself as the odd man out among physicists for most of them,but I held my own.

Also, for what I think was the FIFTH year in a row, I did my massage demo. I've been massaging people for 30 years now, and the massage demo thing at TusCon has kinda become a given. In fact, I was told this time out that I can do that demo as often as I want until they stop doing TusCons or I stop coming.

I'll probably keep going because as much as I like going to conventions, I like participating in them more, and the ONLY Arizona con that gives a rat's ass about using me as a panelist is TusCon. I've been asking programmers for the local Phoenix cons to put me on panels for years, only for that request to be completely ignored.

I mentioned this to some other people at TusCon and they said they have the same problem. It's like the Phoenix organizers are a clique that don't want anybody invading their space. Invading their "space." GET IT? I MADE A FUNNY!