FORTUNATELY I'M TOO PROUD TO BE JEALOUS

My kids have a band. I've mentioned that.

They're really good. I've mentioned that, too.

But here's the cool thing. The guys have played like, five gigs or so and they're already having to TURN DOWN GIGS because they're booked already.

I can't remember the last time I had to do that.

I don't know if I've EVER had to do that.

Please come out this Friday and check them out. They're REALLY REALLY good and funny.

Number 1: A friend of mine called this maybe the best thing he's ever seen. I won't go that far but it's definitely up there on my list of "must sees..."

Then there's the new one by Weird Al Yankovic and Jib Jab, which I'm not allowed to embed so you have to click here:

I dunno...I certainly would've watched it on Saturday Mornings in the 60s...

The place where I work is currently looking for a front desk person. You need to be fluently bilingual. (English/Spanish.) If you're interested and you don't mind driving to freakin' GILBERT every day, let me know.

Went to a party last night hosted by a local group of fans called the Dark Ones. It was a lot of fun with a lot of free food and it's amazing how often the "small world" syndrome kicked in last night...

SOMETIMES, PLAYING MUSIC IS ALL YOU NEED

My friend Pete alerted me to the fact that a bunch of local musicians were going to converge on the Yucca Tap Room at Southern and Mill on Wednesday night to play Bob Dylan covers. And one of those people was going to be Jim Beach, who, 30 years ago this week, became my college roommate for the last semester that I was actually at NAU (I finished up in 3.5 years; interned the last semester and became the advertising mogul in my mind that you don't see today.)

Along with Jim's cousin Perry, who lived two doors down in the dorm, we formed a formidable band called the Rocky Mountain Oysters. We played some of the finest sandwich shops in Flagstaff and made enough buzz to get written up in the paper right before the semester ended and we broke up. 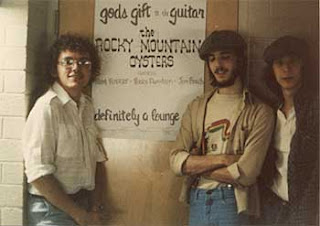 Since my wedding in 1981, I've seen Jim twice. We hadn't played music together since 1981 and I hadn't seen him since the late 90s when he was in a band called the Royal Normans. Then he moved to Texas for a while.

So I figured I'd go watch all these local luminaries play Dylan Tunes and maybe I can crash the party and play a couple songs myself.

Jackpot on both counts! I got there before anybody and shortly after that, Hans Olson, with whom I have a mild acquaintance, walked in. So we had a beer and talked for about an hour when finally Mark Zubia, who was running the show and whom I had not met, wandered in. He mentioned a couple of cancellations, and despite my best "Me, Sir! Me, Sir!" he didn't get the message. So a little later, when Walt Richardson walked in, I plied the grease. I met Walt earlier this year when we did a gig together and reintroduced myself. He introduced me to Mark and Mark says he can put me on right before Jim Beach.

And then on cue, in walks Beach. Surprise, hugs, hey, guess what -- we're gonna play together!

So the idea was to be sure that everybody did different songs so that there wasn't 10 different versions of Blowin' in the Wind. We figured out that nobody had taken "Buckets of Rain" or, oddly, "All Along the Watchtower," so I did those songs with Jim playing along. Just like 30 years ago. Totally. Cool.

What a night. I'm still stoked.

To the SHOW. Get your mind out of the gutter. 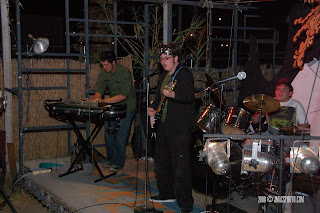 That's Brendan on Guitar and Adam on the drums. David the Keyboard player isn't my kid but he's a great guy and a great keyboard player.

MY next gig is TONIGHT! Kozy Cactus across from PV mall in the Target strip mall. 8 p.m. Good food! Come on out!

JUST BECAUSE IT'S THURSDAY...

Apparently, ukelele orchestras are big in Europe. Britain, especially, where there are three or four of them actually making a living.

I wonder what Kate Bush thinks of that...ah what the hell, she got her nickel. Or shilling or whatever they're using over there now.

------
While my gigs are few and far between currently, my sons' band Thunderstump keeps piling them up. This weekend on Friday night they're at the Firehouse Art Gallery on First Street north of Roosevelt from 9-10. Check 'em out, it's free.

Then on August 23 I drive Adam's drum kit out to the Red Owl, 101 and University, for a gig. Time TBA. (It's the night after Romantasy Cabaret, literally next door in Club Red and YOU BETTER BE BUYING TICKETS NOW at www.brownpapertickets.com because I've SEEN it. I'm going to the dress (or un-dress) rehearsal Sunday. Hoo Boy.)

Then, on the first Friday of September they play at Donna Jean's Libations, 67th Avenue and Bell. 9 also.

There's also talk of them playing at the Firehouse AGAIN sometime in the near future.

I have about four songs half-written in my head and they won't progress, dammit.

I mentioned this on Facebook last night but it's more permanent here: I would think, that when you become coherent enough to realize that your first name is PLAXICO, that you would come to the realization that you are the ONLY person named PLAXICO on the planet. You are the only person named PLAXICO who has EVER been on the planet. And realizing how unique you are -- that you're the only human with a name that immediately ranks you with the Moon Units, Dweezils and Zowies of the world, it would seem to me that you would go OUT OF YOUR WAY to never do anything so STUPID as to carry a concealed weapon into a bar in a state where that sort of thing is illegal, and then SHOOT YOURSELF IN THE LEG WITH IT. Especially when, just two years ago you caught the winning pass in the Super Bowl using your hand and your helmet. You were popular Plaxico then. You were a star. Now you're just an idiot looking at jail time. I mean, it's not like you can point the blame at somebody else: "Sorry officer, you got the WRONG Plaxico!" 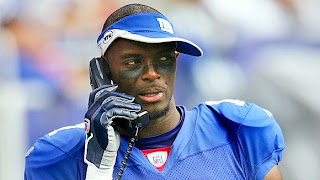 OKAY, JULY'S OVER, THANK YOU FOR PLAYING OUR GAME

I think that when it comes to terrible weather, this July is pretty up there with other terrible months I can remember. It didn't really rain much so we didn't get the "nature's reward" for putting up with the crap heat. We're in to August now, which is never much better but at least there's light at the end of the tunnel.

And there are reasons to be outside: This Friday during First Friday festivities downtown my sons' band Thunderstump is playing from 9-10 p.m. at the Firehouse on First Street just north of Roosevelt! It's free and they're funny! Come see!

I have a gig on Saturday the 15th at the Kozy Cactus, outside of PV mall in the Target parking lot. Good food, cheap. Eat dinner and watch me make you choke on it.
8 p.m.

My wife had a birthday last weekend and received a GPS system from me and lots and lots of cake.

Bob Dylan is in town a week from Tuesday. Which is why I'm not going, unless somebody drops tix in my lap.

I'm starting another blog which will be about my experiences in this entirely new environment of working with the computer-savvy, of which I am not. When I'm happy with what I'm posting I'll let you all know about it.

We were at a party last weekend and one of the attendees brought along her kids, the youngest of whom is 18. Somebody mentioned that the 40th anniversary of the Woodstock Festival was coming up and I heard the kid ask her mom, "What was Woodstock?"

You can now feel old. Go right ahead.

That weekend 40 years ago, I wasn't really that far from the Woodstock festival. My family was across the state in Buffalo, New York, visiting old family friends. Their family had two 18-year-old identical twin daughters who were really debating going (if they did I would've hidden in their car trunk just to go) but once they heard that the freeway near the site was closed due to the traffic, they decided not to try.

If you've never seen "Woodstock," the movie, you should. It won the Oscar for best documentary in 1970 for good reason; it's mesmerizing. Nowadays you can only get the "Director's Cut," which is good too but plan bathroom breaks. Which is more than someone at Woodstock could have done.

Woodstock is one of those events where more people who were ever there probably say they were there because they know they can get away with it, or because they've talked themselves into BELIEVING they were there. It's like Bobby Thomson's home run in 1951 that won the pennant for the NY Giants. (THE GIANTS WIN THE PENNANT! THE GIANTS WIN THE PENNANT!) In interviews, Thomson has said that he has met at least twice the number of people who could have been in that stadium that day who all swear they were there. Even people who clearly weren't old enough.

Tickets are on sale for the next Romantasy Cabaret, Aug. 22. Get 'em now. This is gonna be one HOT show. I know 'cause I was at rehearsal yesterday. Yikes! Go to www.brownpapertickets.com immediately!