I CAN'T HELP IT

I was reading about Star Wars and this jumped out. I know it doesn't make sense.

(I wanted to say "I got married on the planet Endor" but I KNOW that's not right.)

Sorry. Back to your regularly scheduled whatever.

This isn't earth-changing or anything, but starting in September, TCM is going to start showing reruns of the Dick Cavett show. I can't wait. The Groucho show alone will be worth it.

My wife is headed off on her first road trip without me in years. She's going to LUMOS, a rather philosophical symposium on all things Harry Potter. Kind of a MENSA-level con. It's up in Vegas, it's been sold out for months, and she's headed up there with our friend Shirley. That means it's me and boys for four whole days.

I told Jan that while she was gone we were going to behave obnoxiously and survive on nothing but bacon. She doesn't believe me. But she doesn't put it past me, either.

With the unstable weather of the past few nights, our mighty Welsh Corgi, Dweezil, has been the source of unbridled hilarity as he alternately hides/panics/inspects/runs/hides again from the wind and sporadic rain. Obviously the Welsh weather is not inborn in this one.

I LOVE this place.

No one in the audience (except my family) is under 50. Most aren't under 70. They mostly travel from Sun City and amidst the staid, "safe" (but frequenlty phenomenal) performers who play there every Monday night, I'm sort of the frisky whippersnapper.

Needless to say, my song "Sun City Sinners" is a big hit every time i go out there and play. This time, I'm armed with CDs! Should be a good night. I hope.

I really don't know how to tell you how to get there except to do what i do: Take the north 101 west/south to Peoria. Make a left and take Peoria to the light just past the "Library" icon sign. Go south to the stop sign and it's the big white building.
Park, go in the library, and it's the big, usually closed doors on your right.

I have appeared on this stage countless times (at least I've lost count!) over the years and it never ceases to amaze me who I get booked with. I REALLY like it when the first act has lulled the crowd into submission with a half hour of songs about Jesus. I do really well on those nights. Or the guy with the musical saw.

Anyway, I'll let you know how it goes.

My wife's dance troupe, Natium, played another SRO show at Big Daddy's bar and grill the other night. They were really good, too, and deserve the crowds. The promoter wants them back next month, so they'll be there on the 26th with a slightly different (shorter, due to the summer heat) show.

SOME PICTURES ARE JUST FUNNY.

This doesn't even need a caption, does it? 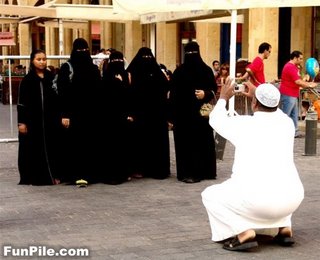 Sometimes you play gigs that are unqualified successes, and sometimes you take one for the team.

In this case, my "team" is the folk music community.

Take my advice: do NOT play Three Roots Coffee House in Tempe.

It's a nice enough place, the help is stellar and wonderful, but nobody going in there wants to hear music. They want to Googlesurf on their laptops.
Maybe if you play instrumental, unassuming classical music, it might work. But nobody tips, nobody listens and nobody cares. Caveat performers.

I checked iTunes yesterday and now BOTH of my albums are available for download.

Somebody download a song. I'm curious to see how much I actually get paid.

I heard somebody on the radio today say "It's too hot outside to be naked." I wondered about that, then I stepped outside a little later and the guy was right. Some days it IS too hot to be naked. And today was one of those days. I was glad I had clothes on, which is weird if you know me.

The other night, though, Jan and I went to the First Friday Art Walk (The Grand Avenue part, anyway) and among the galleries we visited was one called "SOUL INVICTUS," where the focus this month was on erotic art, and in the back area, they were painting naked people. I'd post pictures of the most impressive ones (a guy whose body was painted to look like a skeleton rising from flames, and a woman with a sort of stained-glass pattern on her body), but since genitalia is clearly shown and I don't know how Blogger feels about stuff like that, let me know if you want to see them and I'll e-mail them to you. They're really neat.

This same gallery was featuring free (clothed) massages in the back. I got my back worked on by a woman who really knew her stuff. Meanwhile, Jan watched what she called "the massage show": Two guys who worked together on a rather large woman, and they were literally climbing all over her and the table, performing a kind of two-man Thai-massage. Jan said it kinda looked like ballet.

We also visited a gallery where a woman produces wearable glass -- beads, chains, necklaces, bracelets, etc. Neat stuff.
The Art Walk is a very neat thing and I think if you haven't done it, you should every once in a while.

We spent the Fourth of July weekend in San Diego, attending Westercon, the Western Regional Science Fiction Convention, and for the first time in years it was actually fun! Lots of neat panels and I got to play a show there. I also sold about $200 worth of CDs, and I performed my song "Baby Boomer" for a bunch of people to great applause in a "filk" (sci-fi folk music) circle. One of the appreciative crowd was none other than world-renowned author Larry Niven, who doubled over at one point. He also made a point of telling me how much he enjoyed the song, which was pretty neat.

On July 4 proper, with the con over, we headed a bit north to Torrey Pines Beach right around sunset, then drove a little FURTHER north, through Del Mar to the town of Solana Beach. There, we found a FANTASTIC Thai Restaurant, called Bangkok Bay. Yummy!

Heading back after dark, we drove down I-5 and witnessed about 6 separate fireworks shows at the same time.

We actually headed to the beach a few times while we were there, usually at night. One night we took Adam's girlfriend Heather along with us: 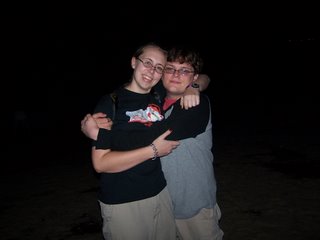 Trust me, they're at the beach. That big black area behind them is the Pacific Ocean.

Many of us have reached the point where we no longer look like our high school selves. There was a lot of peering at name badges to match the yearbook face on the badge with the badge-wearer.

While I wanted to go, to catch up with a few people, I was also there to hopefully make some money, which I did. See, five years ago there was an impromptu, find-who-you-can party at the home of one of our alumni. They didn't reach everybody but they did a pretty good job.

That year, the party was in October, and coincided with the Prescott Folk Festival, which I played at late in the day, so I couldn't get to the party until after dark, after most people had left, and after those still there had been drinking big time.

So I pulled out the guitar, and eventually left the party at about 2 a.m. with a couple hundred dollars from CD sales.

This year, I was specifically ASKED to bring my guitar. So I brought the CDs too. And when the stragglers retreated to the hotel bar to reminisce, I played a bunch, sold a bunch, and made another nice dent in my CD supply.

Some of us look like 50-year-old-plus men and women, which is sad because none of us are 50 yet.

Some of us, including a former co-worker in the ad biz, look EXACTLY THE SAME. I don't know how they do that.

Some of us look like 30-year-old women. They must hit their knees at night and pray to their plastic surgeons.

Others look like 60-year-old women. One girl in particular. I felt kind of sorry for her. (Some skinny people tend not to hide wrinkles very well.)

And some of us (I'd like to think I'm in this group) just look like we're somewhere in our 40s, which is fine.

It was nice to see that one particular fella, who was hitting the juice pretty hard at the 20th, had apparently given that up.

With all that aging going on, my song "Baby Boomer" went over big time.