I'M CHANGING JOBS SO I CAN BE A HOO-HOO.

Maybe if I get in good with the Grand HooBah, I can be a Hoo-Hoo Snark!

And not just a normal Hoo-Hoo. A CONCATENATED HOO-HOO!

What do they drink at meetings? Yoo-Hoo? Mountain Doo?

Warren Harding was a Hoo-Hoo. And we have the same birthday.
That's it, I'm going back to my college job at the Lumberyard so I can be a Hoo-Hoo.

THE TUERFFS GO TO A HALLOWEEN PARTY

Yes, last weekend we went to a Halloween party thrown by our wonderful friends the Shaffstalls. All the costumes were great but I decided that I wanted to do something interesting. So, a few weeks prior, I went looking for a band uniform -- not just any band uniform but a "Sgt. Pepper's Lonely Hearts Club Band" uniform, like what the Beatles wear on the album.

I couldn't find any stateside. (The do exist but you have to get them from England). Not wanting to wait for the costume to appear on a barge, I decided that if I couldn't do Sergeant Pepper... 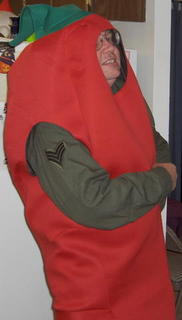 ...then I would do Sergeant Pepper.


The flat-out winner for best costume, though, went to this couple, the mourning bride and her late husband. 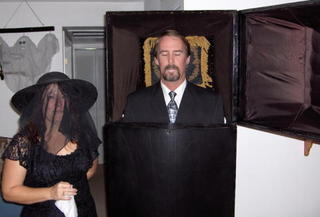 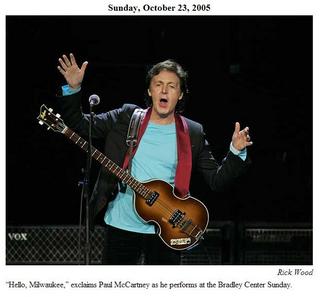 I guess there's something to be said for vegetarianism. He looks great! If goofy.

I've just received rather distressing news that the only hot spring within 50 miles of my house has been sold to two couples who have not announced whether it will continue to be clothing optional or not. This makes me sad. El Dorado Hot Springs was/is a wonderful place to relax and to drag people who would otherwise not go do something like that.

Here's a pic from a couple years ago when a bunch of us went (yes, some of us are naked. Get over it.) 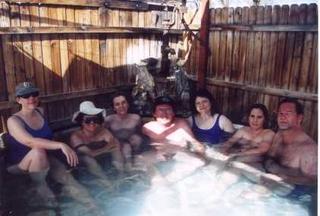 Well, I won't give up complete hope until I hear something for sure. But the new owners are named Cho and Park; Koreans by nature are not known to be nudists very often. But we'll see.

A couple weeks ago before the Pennant series I said "Go White Sox" and boy did they! So now they're 2-0 in the series so I'll say it again: Go White Sox!

Went up to Scott Hallock's place last night and recorded a multi-talented musician who can play a lot of instruments. Not sure if I got what I wanted but I think so. My CD will be finished, I swear, soon. 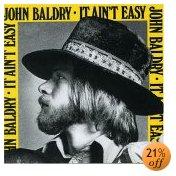 One of the greatest ignored albums of the 70s is finally out on CD, and I got my copy and it's UNBELIEVABLY well-transferred and if you like the blues at all, or if you like John Baldry, or if you want to just discover somebody you never heard of before then you DESPERATELY NEED TO OWN THIS.

Side one of the album was produced by Rod Stewart; side 2 by Elton John. JUST BEFORE they both became famous. Rod's stuff sounds like he was testing what would become "Every Picture Tells a Story," and Elton's stuff sounds like, well, like Elton John is playing the piano. And there's nothing wrong with that.

The extra tracks on this album are a revelation. Even if Baldry does sound a bit snockered.

Trust me on this one -- go to Amazon (or to Long John Baldry's website, like I did -- they'll send you a little memorial pin too -- www.longjohnbaldry.com) and buy yourself a copy of this. Woo Hoo! 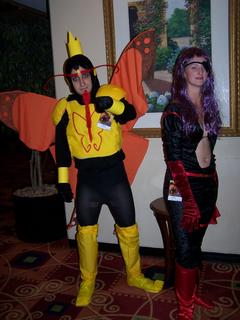 The guy on the left is from an obscure TV show, apparently...no idea who the girl is depicting.

I attended the funeral of my friend Barry today; talk about a get 'im in, get on out affair. I had the distinct feeling that Barry's surviving siblings all had better things to do than go to a funeral. The all seemed surprised that so many people showed up (there were well over 100 people there -- some said 200; I didn't count).

Went up to Scott Hallock's for the first time in MONTHS to work on my CD this afternoon; it's coming, folks. Soon. Promise. Really. Shut up, I mean it! 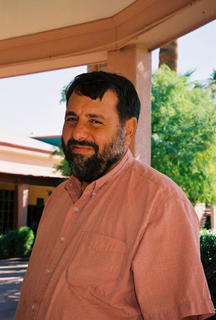 A very good friend of mine, and of many people who read this blog, died this morning.
I met Barry Bard like most people did, at a sci-fi convention in the 1980s. Odd that it took so long, because Barry was at NAU the same time I was, and I always thought it odd that I wouldn't have met a guy with the outgoing personality he had until much later.

If you've ever attened a convention in Phoenix you probably have Barry Bard to thank for all the free stuff you took home with you, because Barry single-handedly made sure that it was there. His connections were amazing.

Just last month, clearly dying before our eyes, you could see Barry at Coppercon unloading heavy boxes of movie posters AND maintaining his usual huge table of books in the dealer's room for awhile, before going home so hospice could tend to a drainage tube in his stomach.

I cannot think of a single person who had a bad thing to say about Barry Bard. Not a one. He was a major mensch.

If you didn't know Barry, I wish you had. Those who did know what we've lost. 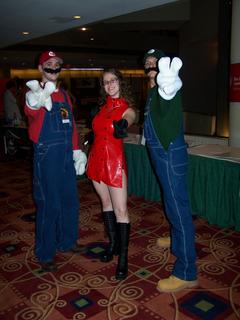 I tell ya, everybody goes to DragonCon. 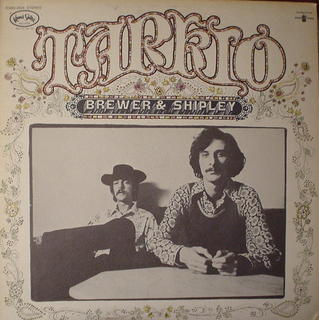 Yep, Brewer and Shipley, the "One Toke Over the LIne" Guys, are coming November 11 to Fiddler's Dream and you WILL come, won't you? More info as I get it.

SPECIAL TOKEN PIC OF THE DAY 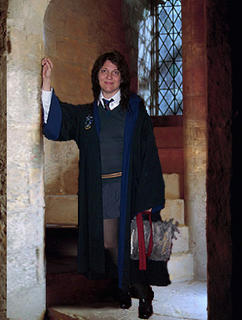 My wife Jan (as opposed to my other 300 wives -- phhht)
is getting really good with Photoshop. Here's the pic I took of her at Dragoncon (scroll down or go back to last month or whatever to see it), cut out, flipped, and dropped into another picture from which she removed a TALLER gentleman and rebuilt part of the wall to cover up where the guy was standing.

I don't even know how to FIND Photoshop.

I'm starting to get spam ads to my blogs. Bad Spam. Go away.

Our board at Fiddler's Dream lost two members in the last week for different reasons. I don't think we have a quorum anymore. One person left due to differences with another person on the board -- definitely not worth talking about but the OTHER person had an interesting reason for leaving -- problems with the definition of "folk music."

Her argument was that according to the charter of our non-profit coffeehouse, Fiddler's Dream was primarily to be used to perpetuate "folk music," specifically AMERICAN folk music. Fidd's, however, has long billed itself as an "acoustic music showcase," meaning that s long as you didn't plug in, you could play whatever you want. She was concerned that some of the recent acts booked at Fidd's hardly fit into even the broadest spectrum of folk music, except for the fac that the acts played acoustically.

MY problem with all this is that I can't draw a line in my head over what constitutes "folk music." We've never put a limit on what gets played at Fidd's because most of us feel that you have to push boundaries. You can only listen to a guy do "traditional" folk songs so many times before you finally get tired of them. The folk music industry includes everybody from Pete Seeger to Utah Phillips to Townes Van Zandt to Ani Di Franco (when you're tired of reading names I know you've never heard of, let me know) to the Nitty Gritty Dirt Band to certain Ricky Skaggs recordings to Anton Dvorak, if you really want to get anal about it. (His most famous compositions were written on a farm in Iowa, and based on old folk music.)

And I can't see the place DENYING the right to play folk music from outside the United States; that just seems rather bigoted and narrow-minded to me.

The retiring board member also said that people were complaining to her about the dip in talent displayed by a lot of the people being booked. I have a hard time with this one because I haven't had ANYBODY complain to me about a single act. We expect that some comments about "quality" are more comments about "content" or "style." I've certainly seen people perform at Fiddler's Dream who I didn't like, or who didn't end up being as good as we thought they were going to be, gut that wouldn't necessarily stop me from booking them again, espcecially if they pull a crowd.

I'm just venting here and I know none of you care but it's an interesting topic: what DOES constitute folk songs these days?

A client of ours with operations in Louisiana sent us these cool Katrina pictures: 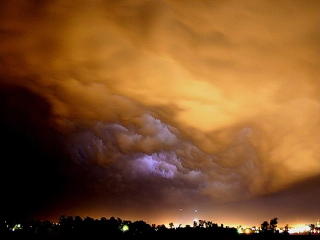 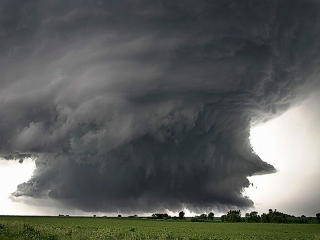 Didn't somebody say something once about beauty in the midst of chaos?

YO HO! THE PICTURES ARE BACK! 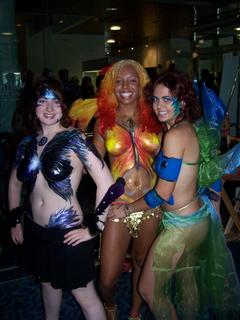 I NEVER looked this good. Fortunately.
Where were people like this when I was their age? I don't even remember hearing about the IDEA of bodypaint until well into the 1980s. Damn Catholic upbringing...

The Prescott Folk Festival was fun this year! I played three totally different sets of different lengths last Saturday, busted a string on my Japanese autoharp, got to sing with my partner in musical mayhem Nancy Freeman and basically had as much fun as a man can have with shoes on. (Yes, I was wearing other clothing as well.)

I brought my 1937 F-hole guitar, which had been previously guessed at to be a Gibson body with a "nobody" neck. I showed it to Joe Bethancourt and he wasn't so sure -- he surmised that it was an early Epiphone body at first, then hemmed and hawed and partially retracted that opinion, finally saying that it could be a "sneak-around-the-back-door-slightly-related-to-a-Gibson" body. I know what he means. So you don't have to.

Dweezil, our dog, made it up to Prescott with us. I can now proudly say that the Dweez has barked at dogs in three different Arizona counties. Ya gotta have a purpose in life, I guess... 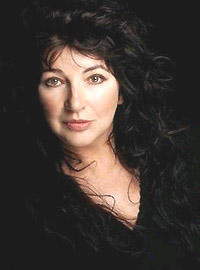 My favorite singer Kate Bush (yep, new photo) is FINALLY releasing a new album after 12 years next month -- just in time to miss my birthday.
Not that that means anything...KATE! KATE! KATE! KATE!