AN OBNOXIOUS, BLATANT PLEA FOR YOUR PRESENCE

Okay. Now most of you who read this thing know that I have been a very busy little entertainer this month. This week is no exception. I have two more gigs to close out the month.

And I know who most of you are. And I know that a lot of you don't live here. But those of you who do should REALLY help the Tomster out here and come see me this week. Because it's gonna be a COOOOOOOOL week.

Tomorrow night (Wednesday) I will be performing at the Beaded Lizard, which is the fancy schmancy name for the weekly performance venue at the Devonshire Adult Center, in Devonshire Park on 28th Street, just north of Indian School. Stuff gets going about 7 and runs until 9. I'm doing a half-hour in there somewhere and there will be other entertainers as well and it's all FREE!

Then on Saturday, the 28th, I am once again proud to part of what the New Times chose as BEST Vaudeville/Burlesque show of the year, Romantasy Cabaret! (See the ad a couple of entries down.) Our first show of our third season takes place Saturday night at Club Red, on the SW corner of the 101 Freeway and University. I'm playing songs AND ACTING in this show. Plus, you will see what can easily be described as our most eye-popping show yet. (If you get my drift. If you don't, you really need to get out more.)

Tickets are available in advance (and I suggest you get them now; we have sold out every show we've done so far) at:
http://www.brownpapertickets.com

THE EMPEROR WAS NAKED; NOW HE'S GONE SO IT'S OUR TURN

I mentioned last week that Alwun's annual Exotic (read Erotic) Art Opening bash was pretty well attended; boy, was it! One of the volunteers last night told me that they had over 300 pre-sold tickets, and the folks just kept on coming. That was obvious from where Janice and I were sitting. We happened to get there before anybody else so we were first in the door. A friend of ours in the show that night had (to our happy surprise) reserved a table at the front of the stage so we sat there. And then we didn't MOVE for three hours because it was Sardineville.

Didn't matter because the entertainment was something else entirely.

There's always nudity at the Alwun openings; that's a given. But this year there was a LOT of it. And it was COLD out. I think I can explain the sudden increase in people attending and people stripping in front of strangers to one thing:

The Regime is over. The conservatives are gone, a new president is in, and even though nobody's working, everybody still wants to party.

I've been going through the pics and video I shot last week trying to find "safe" stuff to put here. I know I can put nudity on this site but I'm not going to do that to somebody I don't know.

However, a burlesque group called Provocatease did a very funny (albeit very long) dramatization of the Seven Deadly Sins. I believe this one was "Greed"... 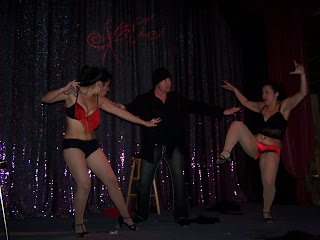 And of course, Gluttony (the bra was edible; I know because she fed me some of it). There just aren't enough tap-dancing cake girls, if you ask me. 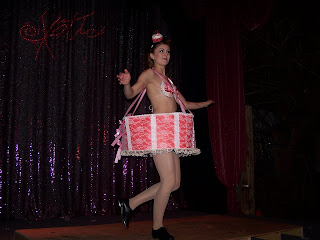 Which brings me to my NEXT gig, which you WILL attend if you live in the Valley and you're not already booked next Saturday (you are NOT allowed to form a band and get a gig to avoid this):

It's the biggest, best, and most amazing RC show yet! I sing, I act, and best of all I DON'T TAKE MY CLOTHES OFF!

I can't speak for the rest of the cast...well, I don't think you wanna see Jimmy Pines naked, anyway...but you DO want to hear him play!

GET YOUR TICKETS NOW AT www.brownpapertickets.com and I will see you this Saturday, your smiling face, your jaw agape, especially in act three when the girlies girlie, and when I can guarantee you that the first bit is going to surprise the hell out of a bunch of people (I'm not in it, but I co-wrote it. That's all I'll say.)

And NEXT SATURDAY, the 28th...This IS what you're going to do because I'm telling you now:

Okay, I got a little carried away there, but really. Get your tickets NOW and you'll be as close as you can to the stage. Which you really want to be, especially for act 3.

Tomorrow, Radio Free Phoenix is inviting everybody to a picnic at El Dorado Park from Noon - 3 p.m. For those of you who just woke up, radiofreephoenix.com is the FINEST internet radio station in the WORLD. The deepest mix of music from the last 40+ years.

Ir also happens to be the home of MY INCREDIBLY FINE SHOW, "Zappa Universe," Sundays at 6, with a repeat at 11!

TIMES ARE TOUGH, AND ALL THAT STUFF, BUT...

...Can any of you out there help my kid find a job? Brendan's in a work/study program -- i.e. he works, he sends in his pay stub and he gets school credit. Thing is, he needs at least 20 hours a week and where he's at now he's not getting anywhere near that.

Currently he works at a Wendy's but he's had previous experience at retail establishments and he was also a janitor at a dance studio a while back. So he can do "high school" type jobs, which makes sense since he's in high school.

If you can help/point out a direction for him to look, please don't hesitate to tell me! Or him!

Yesterday was President's Day. Since I'm a presidential geek I am now going to tell you a bunch of shit you really don't need to know about our Commmanders in Chief, but what the heck...

When FDR died, his mistress was staying with him. Eleanor was out of town on business. They had to scramble to remove any sign of the mistress before Eleanor got down to Georgia where FDR died.

Grover Cleveland is the only president to personally hang somebody.

When JFK was shot, he was a literal sitting duck. He was wearing a back brace which would have made it impossible to duck if he'd known the shots were coming.

Oh, and he also had chlamydia during the Bay of Pigs fiasco.

George Washington spent 7% of his presidential salary on beer.

John Wilkes Booth can be seen in the photograph taken at Lincoln's 1865 inauguration. It is said that whatever Lincoln said that day moved Booth to do the deed, which he did about a month later.

We attended the Exotic Art Show opening at Alwun House Friday night and although it was extremely COLD there was a virtual smorgasbord of entertainers that went on much longer than anyone probably figured it would.

I'd post photos, but there was more nudity than usual so I need to go through them to make sure that I am not potentially getting some school teacher fired.


I'm off to rehearsal for the next Romantasy Cabaret on 2/28 at Club Red. BUY TICKETS AND COME SEE THIS. Go to www.brownpapertickets.com now. More later...probably tomorrow...

DON'T READ THE ARTICLE; THE HEADLINES ARE ALL YOU NEED

Next week on Bridezillas...

My friend Chris Tenaglia turned me on to this:

If any of you decide to apply for it, I'm applying to be your man Friday.

And speaking of Chris, he says he couldn't help himself. He took the photo I posted a couple days ago of my friend in the Morticia Addams costume and retouched it: 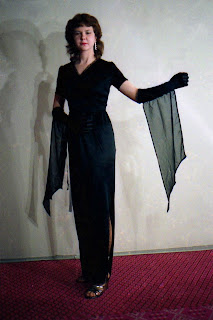 Got rid of all the scratches and everything! Thanks, Chris!

Speaking of finding old negatives and scanning them, I dug up some shots from a 1979 Hoyt Axton concert at NAU. Here's a few... 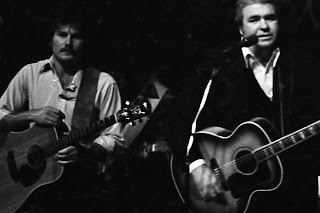 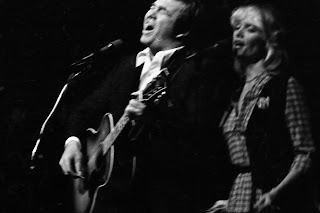 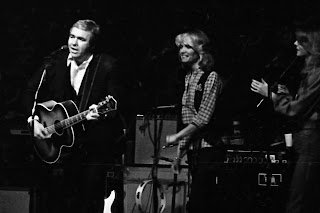 And here's John Dillon of the Ozark Mountain Daredevils, circa December 1977: 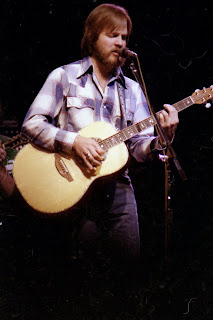 I recently had to get new home insurance (long story -- PVC pipe is NOT your friend) and I discovered something: Those companies that spend a lot of money on TV are making you pay for it.

I knew I was gonna have to pay more a year for my insurance (PVC pipe is NOT your friend), but take a look at the difference:

What I was paying annually at my current place: $562

What the Gecko at GEICO wanted (and this was the lowest from the "many companies we work with": $2,872

What Flo and the folks at Progressive wanted: $2,080

What the nice lady at the Allstate near my house got for me: $1,100. Less than twice what I was paying. I went with that.

Allstate doesn't spend near the amount of money on TV that the other two do. That's gotta be part of it.

If anybody wants to come over and give me a really nice massage, I won't stop you.

BEING FOR THE BENEFIT OF DONNA JEAN'S

Last Saturday night I played a benefit for the Leukemia and Lymphoma society at a bar called Donna Jean's Libations. I got the gig quite coincidentally a few weeks back listening to a woman (the aforementioned Donna Jean) talking on her cell phone. She said the magic words, "I have to find one more band..."

There was a pretty good crowd and at least half of them listened to me. I sold a couple CDs and all in all had a good time. An old college buddy of mine, Brian Whitney, and his wife Sheri, came out to see my set, as did our friend Rachel from Romantasy Cabaret (which, by the way, makes its seasonal premier this 2/28 at Club Red, with me, Jan, Adam and all the scantily-clad people, circus freaks and musicians you expect in a burlesque show). Rachel's cousins were in the featured band, the Blue Rose Band. I couldn't stick around to hear them because I was due to play at yet ANOTHER party, so I went there.

And SPEAKING OF GIGS, this week I have four in a row!

FRIDAY: I'll be at the FIrehouse as part of a teaser for Romantasy Cabaret. It's at 1st street and Roosevelt, it's part of First Friday so it's FREE!
SATURDAY: Space 55, the people who brought you "Seven Minutes in Hell," and "Seven Minutes Under the Mistletoe," now bring you "Seven Minutes in Love!" Just in time for V-day! 10 acts, seven minutes each, seven bucks. 7th st. and Pierce.
SUNDAY: (At least they didn't have to worry about spelling my name right...) 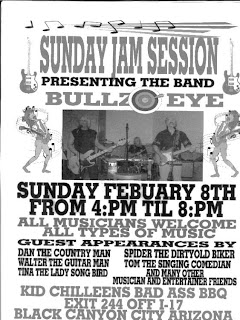 MONDAY: A new monthly open stage at Cookies From Home on University in Tempe! I've been asked to come out and play so I'm going.

Get all the important info stuff at www.myspace.com/tomtuerffmusic

And for those of you who want to go to Romantasy Cabaret, here's the info on that. Like always, BUY YOUR TICKETS NOW. DO NOT WAIT TO BUY THEM AT THE DOOR, AS THERE PROBABLY WON'T BE ANY LEFT.

We always sell out! 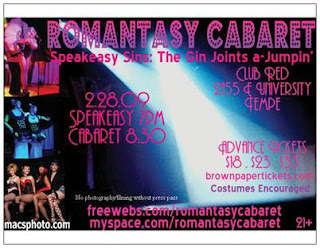 It was nice to see the Cards at least come back and make a game out of it yesterday. No way this game comes close to being as good as last year's NE vs. NY nail-biter.

Oh, and the commercials this year? Un. Im. Pressive. I liked the Conan O'Brien Bud Ad and the Careerbuilder.com ad.

I thought the SOBE ad was stupid. But then, I didn't like the dancing lizards last year, either.

I will say this: Due to the game's close proximity to dinner time, I managed to watch the whole game without eating any junk food!

We had chicken curry for dinner. It was good.